Got my Oregon driver's license today. And for the first time in over 20 years, I did it more than two days before it expired.

Today we found out that Pari is deaf in one ear, most likely permanent. We suspect it's been happening for awhile and was just a complete loss recently. For the moment she's getting steroid treatments that might help but will do no harm, and she's dealing with it well. After a followup we can look at hearing aid options that would help maximize existing hearing. It was a bit of a surprise, but we are adapting to the new norm.

It's been over a year since we moved to Portland (a year and 8 days, I think). Still trying to replace the network of friends that took over 20 years to accumulate in Lawrence, but I've been employed for over 6 weeks at a job with some pretty cool people at a payrate that makes a huge difference in our lives (I can cover food and gas, which frees up a good chunk of the household budget to pay down debt related to household renovations). I can see staying at this company long term, it's mostly customer service with some shipping/receiving tossed in. I'm also checking out the local nonprofit run haunted house to see if that will become my zombie walk replacement, since the local walk doesn't seem like much more than a poorly planned flash mob.

We just had the roof redone, next project is to scrape and paint the outside of the house, then start tearing down the hottub hut and deck that is taking up way too much of the back yard. This will keep me busy for the greater part of the summer.

I just finished my first two weeks of employment, since they are increasing my hours I'm assuming they think I'm doing ok. The twice a month pay schedule with a 5 day lag while they do payroll means my first paycheck is still a week off, but the income is going to make an incredible difference to us.

Kids are out for the summer, at some point I'll be subjected to camping again.

I landed a job! Inside sales at a flag and banner place, I was interviewed last November but they ended up having a last minute applicant with experience and graphics job skills that left me in the dust. They have another opening and gave me a call, I went in today and they confirmed my availability and such. The money will make life much easier, and we can continue to fix up this house. Next month we get a new roof put on, after that we get to tackle the plumbing.

After a monthlong process of finishing the floors of the new house and hauling stuff over, we are fully in our new house and handed in the keys to the rental house we occupied for about 9 months. Now we just have to unpack a whole lot of boxes that were packed with limited organization.

We closed on a house last day of March, and we have spent 2 weeks doing things like sanding, staining and varnishing the entire first floor. In about an hour, two guys and a 17 foot truck are going to come here to the rental house and move all the heavy stuff (beds, dressers, couches, washer/dryer, my 250 lb bread slicer, the usual stuff) and we have until the 30th to get the rest of our stuff moved and this place cleaned.

There's plenty to do on the new house, upgradign the plumbing, electricity and dropping a new roof on, then taking down the aging deck in back to install a garden and chicken coop. I'm constantly updating on facebook for anyone who may want to follow along.

We've been in Portland for almost 9 months. Last week we closed on a house, which is significant because the housing market out here is super crazy expensive. But buying is cheaper than renting, becasue the rental market is even worse than buying. So we found a decent size house for a reasonable price, it needs some work (was a rental since at least 2000, lived in but not maintained the best) so we are working on catchup maintenence. But there is hardwood under nasty carpets, the foundation is sound and the neighborhood is decent. We'll be spending some money putting on a new roof, getting the plumbing up to code and removing a hot tub with hut from the back deck, but the house appraised for $57k more than we paid, so bonus for instant equity.

The local zombie walk doesn't seem to work out for me due to the organzier not seeming to be interested in volunteers. I did get on an email list for a local nonprofit haunted house, we'll see if that reignites my passion for nonprofits. I have landed a job doing production sewing, we'll see if that works long term or not. At the very least it's a stopgap that brings in grocery money and has flexible hours so I can still shuttle the kids to school and back. 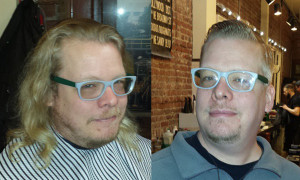 Been in Portland for about 6 months, and am seriously gearing up for the job hunt. I even got a big boy haircut.

Today the kids and I arrived in Portland, Oregon. My wife got a job here, the house is big and the area nice. Our stuff will arrive in a week so we'll have furniture and everything. Goodbye Kansas, I'll miss you but too many nutjobs in politics have made you hostile to education and special needs population. Hello Oregon, I hear you are progressive, looking forward to making your acquaintance.
Collapse